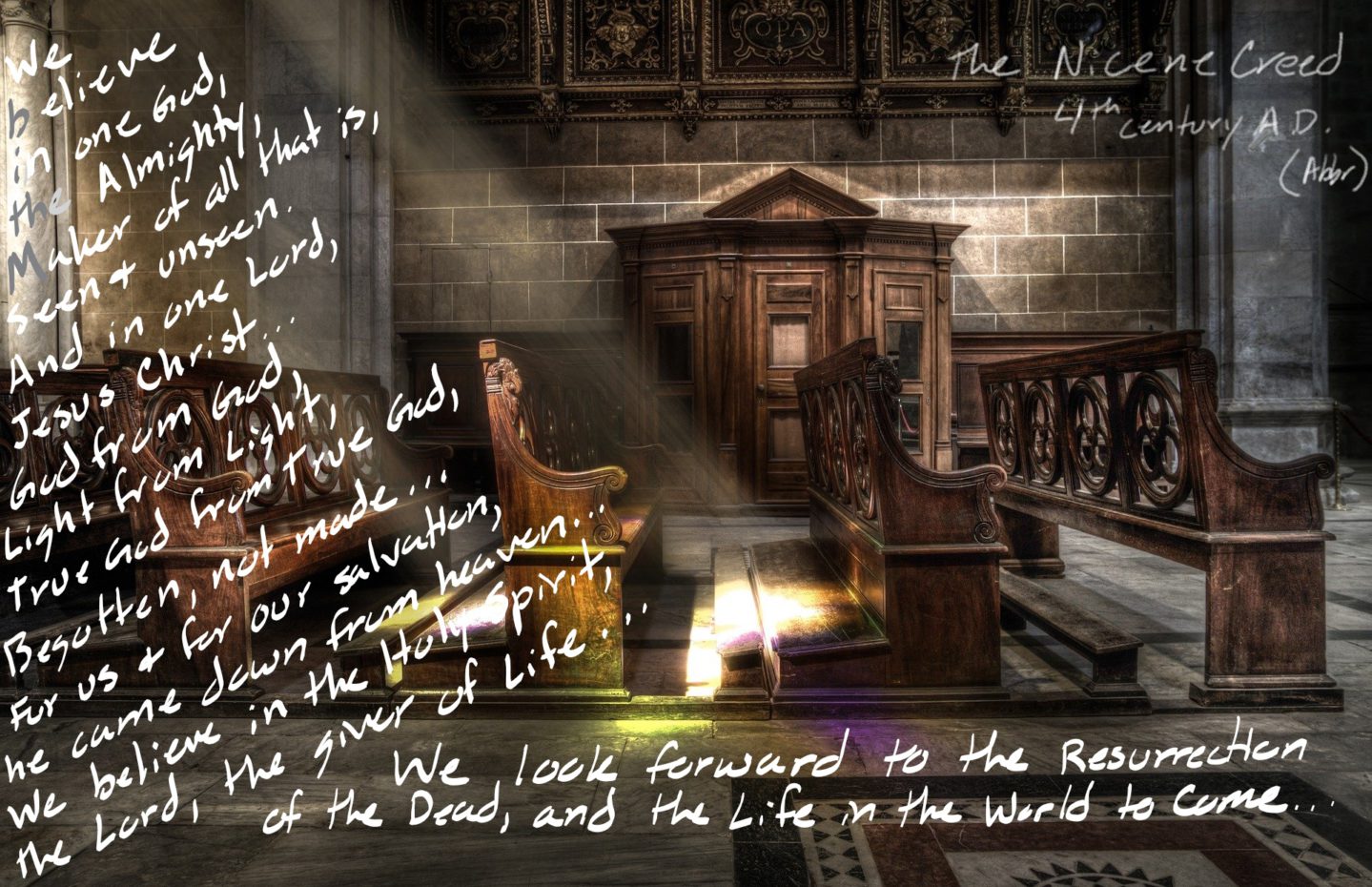 The following statement has developed during my lifetime in the church, my exposure to several different Christian traditions, my undergraduate study of history, my four years spent presuing two Masters Degrees in the History of Theology and Christian Education, and many, many years of independent research. In other words, it did not come to me over night.

After thrity-two years of careful examination, refection, and soul searching, this is what I believe:

I Believe in One God, the only Uncreated Being. This God is the Creator of all reality, redeemer, constantly sustaining all that exists, eternally existant in Three Persons, so called Father, Son, and Holy Spirit. Together, the Three Persons have and do reveal Godself to and participate in history and in human existence, in many and various ways, to do the work of creating, redeeming, and sustaining.

This is a summary of Christian doctrine regarding the being of God.

I believe that God is the source of all existence, seen or unseen, spirit, soul, and body, matter, energy, 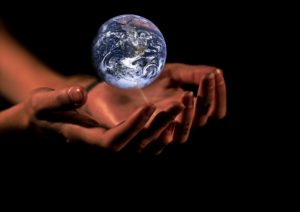 and any other form of existence that science may have yet to discover.

In others words, and in terms as simple as possible, God is Life/Existence, anything else is Death/Non-existence.

At the beginning of what we know as time or the universe or reality, God shared God’s life or existence with non-existence. The result was reality as we humans know it, also and more simply called Creation.

The universe as we known it is, therefore, a composite of life and death, existence and non-existence. We know this combination as “mortality.” 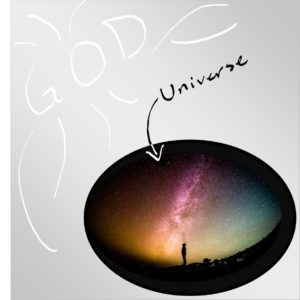 I Believe that God, the only Uncreated Being with neither beginning nor end, exists eternally outside of time and space (that is, outside of reality as we know it).

I believe that we humans exist inside of a time-bound, constantly decaying, created universe.

In other words, while God exists outside, in the Eternal Realm, humanity exists contained inside a Mortal Realm.

By God’s grace, the Eternal and the Mortal Realms can touch each other, but they cannot (or should not be able to) cross into each other.

Therefore, human reality (the cosmos or creation), including but not limited to the human mind, cannot and never will fully comprehen or understand what God is or how God operates.

In other words, the universe itself is too small to hold even the concept of God’s existence, let alone God’s existence itself. Or, as Paul put it in 1 Corinthians 13:12: “Now I see in a mirror dimly…” All that we humans can ever know about God is only a dim reflection of God’s true existence beyond the limitations of our reality.

I believe that, despite our shortcomings in the Created Realm, “God so loved the world…” (John 3:16) that God left behind the glory and perfection of God’s Eternal Realm to be born, to live, and to die as a human being named Jesus. 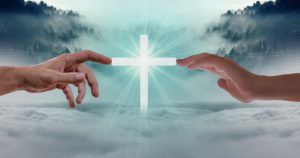 This is the unique event of Christian faith which exists in no other religious tradition.

Why the Unique Event?

Christianity answers this question in several different ways, and no explanation is complete in itself. However, at it’s most basic:

I believe that God is born into the Mortal Realm in order to lead the Mortal Realm into the Eternal Realm, through faith. This faith is the imitation of Christ through holy living which includes the intentional effort to create a better world here and now.

I believe that God is and always has been in the process or bringing the Mortal Realm into the Eternal Realm.

The Mortal Realm will one day end because it is Mortal, and therefore, by definition, it has a beginning and an end. But God’s intention in the creation of our Mortal Realm is, and always has been, to bring the Mortal Realm into the Eternal Realm at its ending.

This is called the apocalypse – a Greek word that means revelation, or Unveling – when mortality will become eternal, and creation will come to live face-to-face with our Creator. It involves the total destruction of the universe as it now is, purging all the weakness and evil now present in this universe, in order for a stronger version of this universe to be reborn into Eternity.

“God, who also made us sufficient as ministers of the new covenant, not of the letter but of the Spirit; for the letter kills, but the Spirit gives life.” 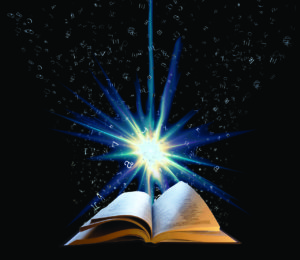 I believe that Scripture is exactly what Scripture itself claims to be, an inspired tool “useful for doctrine, for reproof, for correction, for instruction in righteousness,” (2 Tim. 3:16).

I believe in progressive revelation, NOT that God’s word or message changes with time, but that our ability, as human beings, to understand God’s message changes, grows, and improves with time and with the acumulation of knowledge – which is itself from God.

Scripture is the work of human beings writing in their own unique times and places under divine inspiration. The words of Scripture are, therefore, neither absolute nor inerrant. The messages contained in Scripture, however – what Paul calls its “spirit” (2 Cor. 3:6) – come to us from God, and are absolute, Eternal, and True. Because of the limitation of human knowledge, it is the job of each generation to interpret, understand, and move forward the eternal messages that God has given us.

I am nihilist because…

…I agree with the writer of Ecclesiastes that “everything is vanity,” (Eccl. many times, including 1:2) The Hebrew word habel, translated “vanity” is also translated “meaningless.”

There are different forms of nihilism, so to be accurate, I am an existential nihilist, believing that human existence is without meaning, random, beyond the control of our free will – if free will even exists – and ultimately pointless.

Ecclesiastes is the book of the bible that resonates most deeply with me, and it is a nihilist document, probably one of the first nihilist documents ever written. It is 12 chapters expounding about the tragic brevity and pointless of human existence, and the absolute uselessness of all human effort. All humans, wise or foolish, rich or poor, powerful or weak, good or bad, ultimately die are are forgotten. Anything they do manage to achieve in their brief lives does not last long after their deaths.

I am postmodern because…

…I believe in progressive revalation, the accumulation of knowledge, and the human inability to ever fully comprehend God.

There will, in other words, always be things beyond our knowledge, and beyond our control.

I am Christian because…

… I believe, along with the writer of Ecclesiastes, that the fact of nihilism ultimately gives way to the fact of God (Eccl. 12:13) and God’s continuing war against nihilism (1 Cor. 15:54). In other words, human existence is pointless – God gives that pointlessness a point, an ending, which is the Apocalypse. 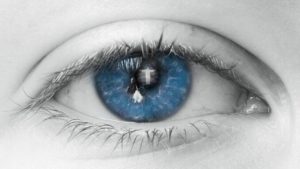 t Absolute Truth does exist, beyond our human ability to comprehend it, outside of time and space, in Eternity. It is the limitation of the Mortal Realm that makes human existence pointless, random, and beyond the influence of free will. It is the grace of God that brings order to the randomness, and gives power to free will. We can never fully understand God or God’s plan, but by God’s grace, we can still enact our part in that plan, here and now.

… I believe that we have one real choice to make in life: To participate in the movement of the Mortal Realm into the Eternal Realm, or not.

In other words, our one, God-given choice is to help God make a better world, or to accept the world as it is.