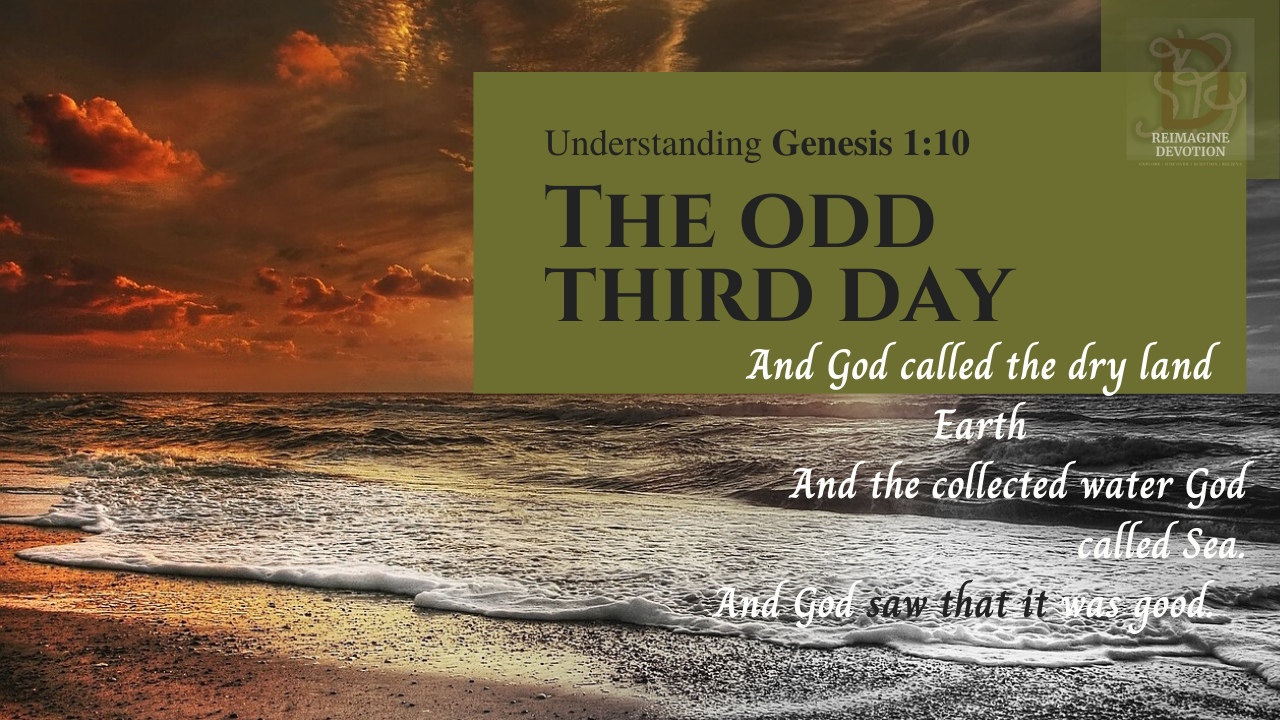 Up until now, each day in Genesis 1 has culminated with the creation of a single thing.

All the days that follow also feature the creation of a single type of thing, except for Day 6.

(The creation of birds and fish on Day 5, while we see this as two different types of creature, is presented in the story as a single creative act. God makes both fish and bird at one time, as part of the same command. It makes sense when you consider how God created the sky and the sea by dividing the “water” into two parts, upper and lower waters, back in Day 2.)

It is a bit odd, then, that the third day does not end here. Genesis 1:10 wraps up God’s third creative act, the creation of dry land –

But this is NOT the end Day 3.

It would seem that the writer of Genesis 1 is making a conscious effort to fit all the elements of creation into an already established seven-day formula. In other words, the tradition that God created the earth in six days with a seventh day of rest predated the actual writing of this story. The writer knew this tradition, and used it as a poetic scaffold, a framework, on which to build his story.

The trouble is, there are too many things for God to create. One creative act per day just does not work. Some things had to be combined. Some days had to see more than one creation.

The combination, however, is not haphazard. The writer did not just randomly smash things together in order to fill out the seven-day formula. He was thoughtful, intentional, meaningful, and – I believe – divinely inspired. He ends up combining creative acts in a way that has its own symbolic meaning.

In order to understand that framework, we have to first understand the symbolic nature of numbers in the ancient world.

In particular the numbers 3 and 7, both of which stand for God, for completion, and for perfection.

In mathematical terms, 3 and 7 are both prime numbers. This means they cannot be divided equally into smaller whole numbers. Prime numbers have always held a certain fascination in the human mind, not only to ancient symbolism, but even to modern mathematics.

The main theme of Genesis 1 is the idea of order out of chaos. God, the origin of all order, righteousness, life, and structure, gives shape to the empty void (chaos) according to a predictable and reasonable pattern of events following each other in logical sequence.

It is no coincidence that this theme of order out of chaos is build around the framework of 7 days.

It is also no accident that the actual creative acts take place in 6 days, the double of the prime number 3.

And it is, I think, also no coincidence that, when the author has to fit more than one creative act into a single day, he chooses to combine those elements on Day Three. 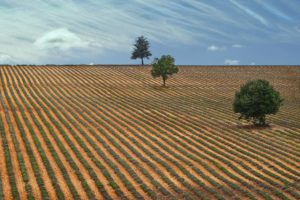 Day Three marks the midway point in creation. It also straddles the line between the creation of animate and inanimate objects.

Again, when you take the ancient world’s number symbolism into account, I find it hard to believe that this is not a coincidence.

A similar division occurs again in Day Six, when God creates all the land animals, and then creates human beings. While, yes, human are technically land animals, the creation of animals and the creation of humans is presented in the story as two separate creative acts. (Again, unlike fish and birds on Day 5, or sun, moon, and stars on Day 4 which are presented as a single creative act.)

Like Day Three, Day Six contains a creational leap forward, bringing into existence something that is not just alive, but rational, capable of independent thought, self aware, like God himself.

The result of all this is that the Third Day, and its double, the Sixth Day, are both given special significance as turning points in creation.

The Seventh Day, of course, is also given a special significance.

These numbers (7, 3, and three’s double, 6) which represent wholeness are made to stand out, all to draw attention to the author of wholeness, the Creator, in whom we find our completion. 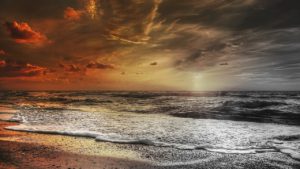 As the creator of all things, God created the very idea that life can have meaning. It follows, therefore, that any search for meaning in life is, in fact, a search for God. This does not necessarily mean that only those who believe in God can find meaning. It means that the desire for meaning is itself divine – or divinely inspired.

In what ways does your faith bring wholeness and meaning into your life? Are there parts of your life that feel meaningless, or ways that you are not whole? Where might God help you in finding renewed purpose? Think on these questions, and feel free to share any answers as you see fit in the comments below.

Missed the last verse? Catch up with Understanding Genesis 1:9.

Move on to Understanding Genesis 1:11 now!